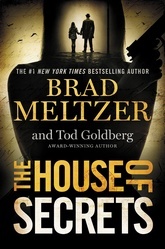 The House of Secrets

A priceless book, hidden in a corpse...and a woman with no memory

Hazel Nash's father is Jack Nash, host of a conspiracy TV show, The House of Secrets. As a child, Hazel loved her dad's tall tales, especially one about a book belonging to Benedict Arnold that was hidden in a corpse.

Years later, Hazel wakes in the hospital and remembers nothing, not even her name. She's told she was in a car accident that killed her father. Then a man from the FBI asks questions about her dad's connection to a corpse found with a book that belonged to Benedict Arnold.

Back home, Hazel finds guns she doesn't remember owning. On her forehead, she sees scars from fights she can't recall. The more she digs, the less she likes the person she seems to have been. She needs to find the truth about her father, and herself.

"Meltzer has earned the right to belly up to the bar with John Grisham, Scott Turow, and David Baldacci."ï¿½People

"[Meltzer] is an architect. His structures are towering , intricate, elegant, and surprising - but always grounded in humanity and logic."ï¿½Joss Whedon

"Meltzer has mastered the art of baiting and hooking readers into a fast-moving plot."ï¿½USA Today

Please enter your email address below. You will receive a link to reset your password.

Are you sure you want to decline the Featured Selections?

A Guide to Our Simplified Prices

Buy Member Credits during the first 10 days of the month for only $14.99 each and redeem them for any book on the site.

Credits will not expire, so you can use them at any time!

All pre-orders are sold at the Membership Price or for one Member Credit, and are shipped separately.

Visit the FAQs for more details